Simon Watts has died. Probably you have not heard of him. His father, Arthur Watts, was a talented illustrator for the British magazine Punch, among other publications. My readers are unlikely to be familiar with him, either. His sister, Marjorie-Ann Watts, is an illustrator, novelist, and memoir-writer in the UK. Her books are not readily available in the USA, so my readers probably do not know of her, alas. Simon’s maternal grandmother was Amy Dawson-Scott, aka “Sappho,” poet, novelist, and British literary hostess who founded English PEN. If you have not heard of her, you may have heard of PEN International, a major writers’ organization.

Oh, such interesting relations and associations!

Simon, who turned 90 a week ago, needs an elegy–but I cannot write one, at least not yet. We have been friends for 35 years; and even though he hasn’t lived nearby, we will miss his presence in our lives because he corresponded well. He sent letters, and emails with memoir documents attached, and photos. He kept up with our children even into their adulthood. He called us. We visited. He told the best stories–always mirthful and full of twists. He wrote articles on sailing, boatbuilding, furniture-making, and sent little essay-type memories to his friends and family.

He hailed from England, emigrated to the US in the 50s, and loved Nova Scotia, San Francisco, and Portugal. He has family in the US, Britain, and Australia.

I was scouting about the internet looking at his work and his family’s stories and came upon his father’s article on drawing in black and white, written in 1934 about a year before Arthur’s early death (he died in an airplane accident). This section struck me as so relevant to my own understanding about both sketching and writing–good writing, poetry, journalism–is also, foremost, about observation and memory.

Speaking of memory and observation, how much I wish that I had trained mine more. How I wish I had employed that excellent method of looking at an object, going into another room to draw it, returning to refresh my memory, and so on, until that drawing was completed without it and the object ever having met, as it were. What a training for an artist interested primarily in character, who sees for a minute a face which, if he cannot draw from memory, he will never draw at all!

I believe I am right in saying that, ages before such a thing as photography was even guessed at, this was the method by which Chinese artists were taught … So developed did their powers of observation and memory become by this training that by shutting their eyes, opening them for the fraction of a second, and shutting them again, they could keep in their minds the visual image of what they saw long enough to be able to transfer that visual image to paper. It was in this manner that they were enabled to draw insects and birds in flight, and it is an indubitable fact that, when the camera was invented and ‘instantaneous’ pictures were produced, it was proved by comparison that these artists’ memorisations were perfectly accurate.

I tried that method myself, but, having no stern master to goad me on and, alas that I should have to say it, being constitutionally lazy, dropped it; for it is the most exhausting form of study that I know.

Simon Watts, the son of this artist (a man he barely remembers), inherited somehow–though expressed in an entirely different way–the recognition that we ought to note carefully and recall the world around us, revel in our memories, and share our knowledge and wonder in whatever ways we can.

He saved historic wooden sailboats by carefully measuring them, building his own versions, and reproducing his designs for others to build.

In the photo below, my daughter, at age 14, happily sails the Atlantic off the coast of Nova Scotia in the boat that graces the cover of his plans for Building the Norwegian Pram. 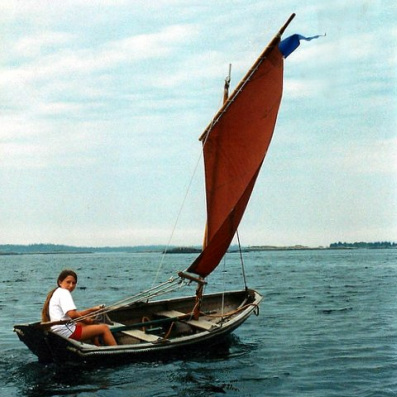 Such memories fall into the category of immeasurably valuable. Right now, this photograph takes the place of any elegy I could compose. Sail on in peace, Simon!