I’ve been reading Robert Macfarlane’s book The Wild Places slowly, chapter by chapter and pausing between, enjoying his sentences immensely and feeling quite the milquetoast in comparison with an author who climbs snowy peaks by moonlight and sleeps outdoors, like John Muir, in scooped-gravel beds in seaside cliffs. I do not require luxury, but I get chilly easily and my hips and back are seldom forgiving when I sleep on the ground.

Still–I might put up with a considerable amount of misery to see the stars or the northern lights above Stornoway on a clear night (admittedly, a clear night is rare up there). And not by cruise ship. Given current circumstances, however, I am not going anywhere, which gets a bit tedious. Macfarlane’s last few chapters begin to focus on specific ways to view and consider wildness–finding wildness closer to home, in the flora and fauna and earth, rocks, topography even of regions that are tamed, farmed, suburban. One’s backyard walk might reveal wildness, though in miniature. 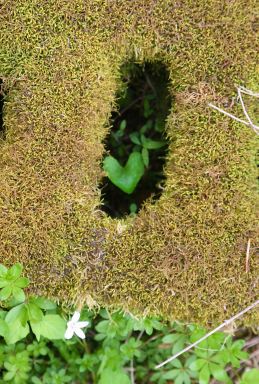 There lies inspiration; I can do that–walk in my yard. Look for wildness. Indeed, I have often proceeded that way, slowly and quietly looking about, creeping low to see the small things, overturning old logs, crouching beside vernal pools and driveway puddles, listening for rustlings in the hedge, noting hawk- or vulture-shaped shadows on the path and raising my eyes to find the birds in flight. What are these things but wild? Just because I am familiar with them, I tend to forget their inherent wildness.

I took a walk in and through the meadow, which has  not yet grown tall with grasses and milkweed and solidago. I took notice of the perennials starting to emerge. Also of the quantity and variety of nutsedge-like plants.  I had not realized there are so many kinds. Amid the low-lying, pale purple violets, the milkweed and eupatorium shoots are emerging. And I found golden ragwort in the field–never had seen it before. 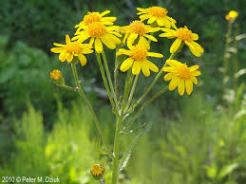 This time of year, the does give birth; I have found fawns lying still among the grasses before and ambled the field perimeter slowly in hopes of such an encounter again. So far, not yet. But yesterday morning, a doe grazed along the edge of the tractor path, her spindly, spotted newborn scampering around her legs. So I know the wild ones are present and going on about their usual spring business.

Of course, the avian realm of wildness gets active in April and May. We found an eastern kingbird nest perched on the flat of a canoe paddle that rests on rafters in winter, under our outbuilding. Discovering the nest meant we had to put off our intended initial canoe float in May.

Recently I learned about bumblebee nests, too, and found an abandoned one under an oak tree in the hedgerow while I was looking at jack-in-the-pulpit, mayapples, fungi, and solomon’s seal. Thrashers, ovenbirds, numerous sparrows, and a noisily-protesting red squirrel raked about under wild black raspberry canes. 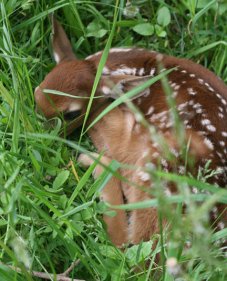 There with the native plants, and aggressively overtaking the undergrowth, are amer honeysucke, asiatic rose, barberries, wintercreeper, japanese knotweed, mugwort, ragweed, burdock, thistle, garlic mustard, and whole hosts of plantains and creeper vines. One part of me abhors them. But I admire their tenacity and their ability to adapt to new circumstances. They’ll probably be thriving long after humankind has departed the planet.

As, perhaps, will the whitetail deer–a century ago, become scarce in the wilderness, considered almost “hunted out”–they managed to recover their numbers through adaptation to suburbia, where they are now “pests.” They graze on front lawns, nibble at ornamentals, gobble the leaves and bark of decorative trees, and gather at street-side puddles to drink, leaving heart-shaped prints in the mud and grass. But on my walk yesterday, I observed a doe lying amid the brambles; and she observed me. With the eyes of the wild, darkly liquid, meeting my gaze with her own. I did not move. Nor did she. I made no sound. We watched one another until, with a fluid motion and almost soundlessly, she leapt to her feet, twisted in the air, and fled in an instant. A brief rustle of trampled branches in her wake.