A student who grew up in Viet Nam and arrived in the USA just two years ago scheduled an appointment with me for assistance in revising her final paper for Philosophy.

My job is to help her with her articles, subject-verb agreement, verb tense, and plural forms and uses, and when to use a capital letter for proper nouns. I also assist students like her with claims, thesis statements, and rhetorical structure–but I am not a “content tutor.” Of course, I often understand the content and find it interesting to observe how young people interpret, say, literature or philosophy.

In this case, Western philosophy, in English, as interpreted by a person raised in a culture quite different from the Western university system norm.

Philosophy 109 challenges many native-born and US-educated freshman students; taking this course as an English-learner with very little “Western” experience must be ridiculously difficult. So I first assessed how the course had been going for her, and she said, “So-so.” What had been most difficult? Note-taking, she said. With the texts she could take her time, translate, and eventually tease out the ideas; but class lectures were really hard. In addition, she struggled with the concept of opposition and rebuttal as structured in the philosophical argument. 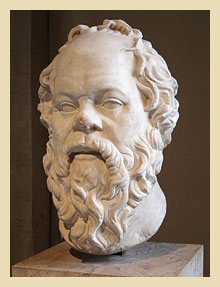 This bust resides in the Louvre, and was found here: http://www.humanjourney.us/greece3.html

Her assigned argument for the term paper was: “The arts, sciences, and philosophy are valuable because they help us to become fully human.”

The paper began with her assertion that the arts make us more fully human because they are beautiful to behold and inspire in us joy and appreciation.

“Is the best art beautiful?” I asked. She said yes, and I asked her, “Is it only art’s beauty that makes us human and good?”

“Not only,” she said, after a moment of hesitation. “Sometimes–sad is beauty. Sad is not good, but sad also makes us human.” She hesitated again and then went on: “I think good art, and good science, has both sides. I think this but it isn’t in my paper. Should I put it in my argument?” We agreed to work on a sentence or two that might express her interpretation more completely while heeding the general conventions of Introduction to Western Philosophy.

Without exception (well, almost), I learn so much from student interpretations of ancient concepts. Rather than rolling my eyes and scoffing at how little they know, I’m searching their perspectives for what it is I ought to know about them and their experiences. The stance of most older authorities is that young people must integrate themselves into our norms and conventions; but we will age out of our power base, at which point we’d be better off recognizing their norms and points of view and exercising our neurons by learning how to adapt to the next set of conventions.

Philosophy and the arts will stay around. I have no doubts about that. The ways in which human beings interpret them may change; all to the good–stasis would destroy philosophy and art, thus keeping us from our potential to be fully human.

*[You might want to read Sister Miriam Joseph’s classic text, The Trivium, for a deeper explanation of how to approach ‘mastery’ of the liberal arts and learning.]

It is the Year of the Horse, and I’m on my high horse again about the value of the humanities and the liberal arts education.

A recent article in the Chronicle of Higher Education reports on studies concerning what preparation a liberal arts degree offers to students once they enter the workforce and suggests that the long-term outcomes (in terms of career and steady employment) bode very well. As I embark on another semester of trying to persuade sophomores that the study of poetry can offer some value to their lives, it helps me to know there is at least some evidence that I’m not just making this up!