On a crisp, abundantly clear day (for a change!), I opened the car windows to listen to the corn stalks rattling in the breeze. After an unusually wet year, the fields have been too wet to bring out heavy farm equipment, like gleaners. They would get stuck in mud. So the corn stands and, finally, dries in the rapidly-cooling air.

And rustles and swishes, and produces the susurration associated with tree foliage, only louder, harsher. The November sun heightens the contrast between the grassy-looking stalks and the crowd of shadows below the strap-shaped leaves. Zea mays: one of the incredibly numerous poaceae monocots. Field corn, in this case. It surrounds two sides of the campus where I work. On windy days, I can hear it murmuring. It has a wistful sound to it, each plant crackling softly against its many neighbors. 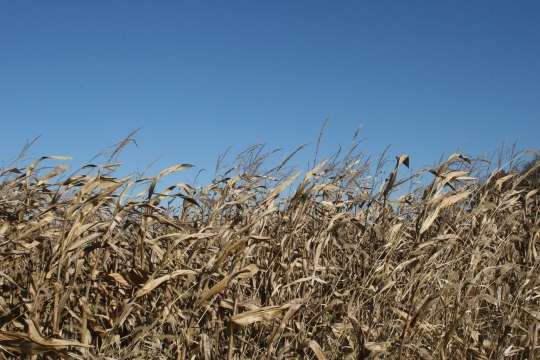 Ascribing human emotions to non-human things is something poets often do and for which they have been occasionally excoriated (see the pathetic fallacy). It is really I, not the field corn, who’s feeling wistful. There’s no reason not to occasionally explore things such as the pathetic fallacy, anthropomorphism, or clichés in poems, though. Poems can be places for play, puns, irony, and over-the-top expressiveness…where else but in art do we have so much possibility for free rein and experiment?

With that in mind, what came to mind is a decade-old poem I played with long ago. I thought of it, located it in my files, and realized how well it suits this year’s rainy weather. It has never seen print, so this is its first public “share” to the small world of readers. Just to be wistful, and to listen to murmurings.

Awful, the sobbing breast of the nearby hill
draped in funereal rain,
moping trees with bedraggled leaves
under dolorous skies.

How coarse and crass the indigent crows
mocking day’s solemnity
over pleading calls for mercy, compassion
from the myriad finches.

Do not quench sorrow but be drenched in it,
small streamlets fast-running
down ratty embankments dull with mud.
O, morning, mourning,

lease your grief to field and gravel and
the huddled owl’s
damp-pinioned back hunched in sleep.
Be terrible and bleak,

stained with the nouns and adjectives of despair,
run down the mountain
with a mouse carcass on your swift spine,
meet the road in a reeking ditch.

The region I live in is not known for dramatic landscapes–no big sky, no ragged peaks or ocean shoreline, no palms, grand flora, impressive architecture. Nonetheless, there are days such as this one when my familiar commute fairly glows with beauty. In the long slant of mid-autumn morning sun, the half-harvested soybean fields shimmer under frost: beige never looked so glorious. Even the big agricultural gleaner glimmers with ice crystals. The sky’s washed with upswept cirrus clouds, and backlit dogwood leaves cling like maroon pennants to silhouetted branches.

Perhaps my aesthetic appreciation of the view is due to a neural release of dopamine responding to images processed through my eyes’ rods and cones; that understanding, if true, in no way lessens my awe.

As I head toward the campus building, the clamorous urgency of wild geese momentarily catches me by surprise. Welcome.

I love this word and its related agricultural cohort, winnow.

Driving to work this morning, I ended up behind a gleaner moving from one soybean field to another situated slightly south on the same road. The link below, thanks to Flickr, takes you to a nice photo of a soybean gleaner at work.

Photo of a gleaner.

Glean: to gather grain or other produce left by reapers. Or, to gather information or material bit by bit.

Winnow: to remove (as chaff) by a current of air. Or, to get rid of, remove (as of something unwanted); to sift or separate. [Merriam-Webster].

Wonderful words for writers, useful as metaphorical or concrete actions, these terms have etymological roots going back to that ancient and particularly human business–agriculture. Lately, I’ve been working on revising some poems, and winnowing is part of that process.

I’ve also been helping my parents to “downsize” as they move from the house they’ve lived in for years into a much smaller apartment. Significant winnowing was involved in several aspects of the word: we got rid of, we sifted through, and we separated. We did a bit more vacuuming than allowing currents of air to sweep away the dust that lingered in the closets, however.

But we also gleaned. Or, shall I speak for myself here--I gleaned. Sorting through books and photo albums and drawers full of things we feel we should save for some reason offers a means of gathering information bit by bit. What for my parents was likely a review of life was, occasionally, revelatory for my siblings and me.

(Etymological aside: review and revelatory have different sources, the latter being much older).

My father’s sermon file and his school ribbons for elocution or winning debates and the books he just couldn’t bear to part with vs. the books he reluctantly let go–these are gleanings.

My mother’s elementary school report cards, her childhood drawings of Japanese ladies with parasols (I never knew she used to draw), faded photos of the high school trip to Washington D.C., the prom invitation, the letters we wrote from college–also gleanings.

From these gleanings I have reaped more than I expected.

So we reap and then we glean and then we winnow and, from that winnowing, we glean again and reap again. Sounds like what I do in my garden annually. Sounds like what the farmer does every year, too, though these days the reaping and gleaning, and much of the winnowing, are done in one go with a very large piece of farm equipment…such as the one which slowed me on my commute to work this morning and which led to this digression.