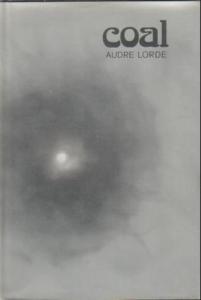 Last night, I had the pleasure of participating in a Favorite Poem Project reading at my university.  I have many favorite poems, but this time I chose to read Audre Lorde’s “Coal”, because of how powerfully it spoke to me when I encountered it as a very young woman in a Contemporary Women’s Literature course in my undergraduate years. Reading it aloud to the audience, I realized the poem speaks to me even now–though in a slightly different way, altered by life experience.

I was not drinking wine
alone on the porch
I was accompanied by clouds
two species of frogs
toads whose squeaking chorused
sex and risk–
also the silent predators
awaiting the amphibian
awakening
hungry after winter
among this vast assembly
I had least to gain
and least to lose
I savored the taste
of my situation
under the near-new moon.

Photo by Plus Blanc Studio on Pexels.com

Read more poems, I advised myself. At first, I thought I might scout around for some writers whose work I am unfamiliar with–writers new (say, Ocean Vuong) and less new (say, Alberta Turner). I have the week off from university work, however, and am lazing about at home…no trips to the library.

I do have my own library, though, much of which consists of poetry collections and much of which I have not read in some time. I chose Audre Lorde off the shelf–her 1986 book Our Dead behind Us. Lorde’s work was pivotal to my early interest in writing poems; I encountered her in a Women’s Literature Studies class in 1978 and was deeply moved by her poems of rage and political awareness, the sensuousness of her imagery.

I chose to re-read some late Plath and one of Adam Zagajewski‘s books, Canvas. What I’m hoping is that some of these re-reads will connect me to areas in poetry I have not explored much recently. Also, I will expand into the works of writers whose poetry I’m less familiar with.

Not to mention the recent work of friends-in-poetry, whom I have let down by not buying their books (yet…I will get to it). So many excellent and thought-provoking writers out there, many of whom I know personally or have at very least met in person and connected via social media platforms. I hope to purchase some of those books at this year’s AWP Conference in Washington, D.C., and thus to keep to my commitment to read more poetry.

Meanwhile, I turn the pages and rediscover “old friends” and their voices, stories, moods. That is a pleasant task, and a fruitful and useful one.