A writer is a person who enters into sustained relations with the language for experiment and experience not available in any other way…A writer is not so much someone who has something to say as he is someone who has found a process that will bring about new things he would not have thought of if he had not started to say them. 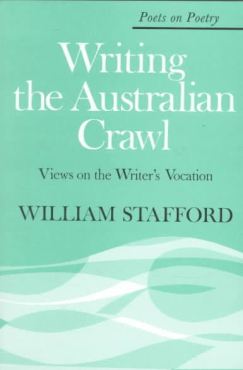 Perhaps oddly–perhaps not–Stafford’s definition that what a writer is comes down to what a writer does bears a certain resemblance to Gerald Edelman‘s “neural Darwinism” theory (ca. 1989 in Bright Air, Brilliant Fire, a more reader-friendly version of models developed in his neural topology trilogy*). Edelman basically says consciousness isn’t a “thing in itself” so much as it is a process that the embodied brain does. The brain’s processing capabilities are individual and endlessly myriad and they operate, claims Edelman, through the re-entry of information in intricately complicated links and physiological systems.  Thus, through evolution’s incremental layering of human beings’ brains, what we call higher-order consciousness makes its appearance.

And then on to gesture, semantics, lexicon, syntax, language, culture, &c.

What is daunting about consciousness is that it does not seem to be a matter of behavior. It just is–winking on with the light, multiple and simultaneous in its modes and objects, ineluctably ours. It is a process and one that is hard to score. We know what it is for ourselves but can only judge its existence in others by inference.

…Once a self is developed through social and linguistic interactions on a base of primary consciousness, a world develops that requires naming and intending. This world reflects inner events that are recalled, and imagined events, as well as outside events that are perceptually experienced. Tragedy becomes possible–the loss of the self by death or mental disorder, the remembrance of unassuageable pain. By the same token, a high drama of creation and endless imagination emerges…The wish to go beyond these limits [of embodiment] creates contradiction, fantasy, and a mystique that makes the study of the mind especially challenging; for after a certain point, in its individual creations at least, the mind lies beyond scientific reach…the reason for the limit is straightforward: The forms of embodiment that lead to consciousness are unique in each individual, unique to his or her body and individual history. [italics mine]

To me, this passage–in a book about neural mapping and brain physiology–feels “poetic.” But what do I mean when I say the concept of embodied consciousness, and consciousness as a series of intricate, synthesized processes, coincides with being a writer? Or in my case specifically, a poet?

It has something to do with taking in the world–through the senses, which is all my body’s really got–and synthesizing all those years of experiences, memories, books I’ve read, poems and plays I’ve loved, people I’ve known, relationships with the environment and with human beings and with other creatures, the whole of my personal cosmos. Referents and reentrants. Relationships actual and imagined. “The remembrance of unassuageable pain.” The process of loafing through the world.

Writing, where much of my so-called consciousness dwells. Not in the outcome, the resulting poems or essays, but in the doing.

* Neural Darwinism: The Theory of Neuronal Group Selection; Topobiology: An Introduction to Molecular Embryology; The Remembered Present: A Biological Theory of Consciousness.