I have just read, albeit slowly, Werner R. Loewenstein’s Physics in Mind: A Quantum View of the Brain. Having finished the book, I can attest I understand his argument even though my grasp of the physics involved is decidedly at the novice level. The last three chapters of the book were what drew me to reading it in the first place–those chapters cap the text with his model of how Evolution (he anthropomorphizes the theory) “chose to design”–in its exemplary, concise way–complex systems that led not just to life but to sentience.

Loewenstein compares neuro/biological processes with computers in terms of their being processors of information from the environments. He seems enthusiastic about computers in general, but he argues that artificial intelligence remains far away from evolving into sentience because consciousness requires many kinds of parallel processing that intersect and interact and filter out information. That complexity, he claims, will be difficult to engineer; yet over eons, the process of evolution accomplished it through a combination of physics, chemistry, and biology.

Loewenstein prioritizes the physics aspect: how electrical pulses in neurons parallel electrical pulses (attraction and repulsion) in atoms, how these behaviors can combine to create compounds or release energy; he uses analogies and spends several chapters on the eye, its neurons and dendrites and cones and rods, to demonstrate how a system of information reception and filtering can occur that relays information to the brain and then back to other information receptors and actors in the body of a worm, bird, or human being. Get enough relay systems going, and sight + touch + smell + hearing + taste evolve into the living animal. At some point, the multiple parallel information systems develop into consciousness (Loewenstein does not speculate where that point occurs–it is still “a mystery,” he admits).

Douglas Fox, writing in Aeon, quotes neuroscientist Leonid Moroz as saying, “There is more than one way to make a neuron, more than one way to make a brain.” In this fascinating article, Fox follows Moroz’s lengthy study of ctenophores, jellyfish-like creatures about which little is understood–though Moroz and his team of researchers are changing that. At the same time, their work suggests that our previous understanding of brain development is not necessarily the only model out there for how neurons and synapses can get information processed and acted upon to sustain a life. If that life is lived under very different environmental circumstances, maybe evolution might “choose” different paths of systematic information processing (ie, “thinking”).

…when he failed to find common neurotransmitters in ctenophore nerves back in 1995, it wasn’t simply that his tests weren’t working; rather, it was because the animal wasn’t using them in any way. This, says Moroz, was ‘a big surprise’.

‘We all use neurotransmitters,’ he says. ‘From jellyfish to worms, to molluscs, to humans, to sea urchins, you will see a very consistent set of signalling molecules.’ But, somehow, the ctenophore had evolved a nervous system in which these roles were filled by a different, as-yet unknown set of molecules.

Fox poses the researchers’ questions this way: “how divergent can nervous systems be? Do we truly understand how life senses its surroundings and behaves?” Science has generally, post-Darwin, followed a straight-line approach to evolution; but good scientists recognize that sometimes the road less traveled by has made all the difference. 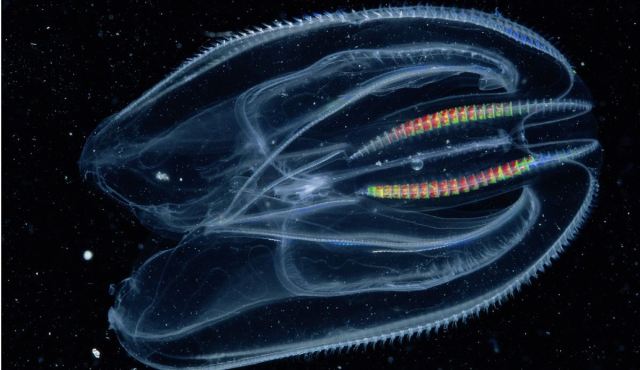 Although the very idea of “sentient jellyfish” might appall many people, I wonder what sort of consciousness ctenophores would develop.  🙂