As the poems in my first collection, More Than Shelter, convey, I experienced mixed emotions about building a house and residing as human animals on a field that was in the process of reverting to wildness. It is a terrific privilege to “own” several acres of property and to dwell and raise food and children here. We have, after nearly 20 years, settled many of our challenges with the environment and its flora and fauna; and often, our lesson has been to let the environment be itself. 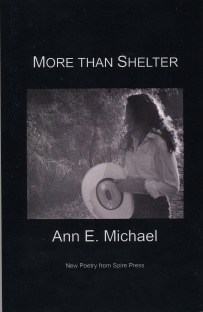 That means our “lawn” has largely reverted to clover and to grasses that can compete with weed seeds. That means we have meadows fore and aft and shrubby, scrubby hedgerows of mixed brush along a thin row of trees and rocks. It means we cannot entirely rid the area of invasive, non-native plants or the insects that come with them. And if a season passes without regular, careful maintenance–the environment will creep in on our living spaces very quickly.

On the other hand, a commitment to use no chemicals–or as few as possible (some exterior house maintenance requires paints and finishes that just are not environmentally-neutral) has meant that the property has good biodiversity for its size. So many kinds of avian life: scrub-loving little brown jobs, woods-dwelling owls and thrushes, turkeys, four varieties of woodpeckers, brightly-plumaged orioles, cardinals, jays, bluebirds, tree swallows, and goldfinches. Also the transient hawks, buzzards, and herons, and the grass-dwellers such as killdeer–to name a few. We are host to winterberry, serviceberry, dogwood, elderberry, nannyberry, mulberry, cherry, and wild grapes, so the wild fruit-eaters adore the place. Foxes, deer, groundhogs, raccoons, squirrels, chipmunks, skunks, opossums, even coyotes and possibly a black bear graze here.

They do not always stick to the margins and the flora. Sometimes they get into the trash cans or the compost heap (I once disturbed a deliriously happy raccoon sucking on a mango pit). Owls and foxes feasted on the guinea hens that refused to go back into the chicken run at night.

This description has not even gotten as far as the insect life, which is lively indeed–nor to the little bats, nor the oak trees’ flying squirrels.

For the last decade, we have been among several neighbors who worked to slow the development of about 60 acres that lies immediately east of us and extends up the last low rise of the Appalachian foothills (Blue Mountain/Great Valley section). We have had some success in limiting the development: there are now 40 acres of preserved land on the north side of the slope, and the “estates” will consist of 13 township-approved house lots instead of the initially-proposed 52.

But the site preparation process has begun in earnest this summer, and each morning–an hour or so after the birds start their chorus–the bulldozers and front-end loaders rev up and begin the crash-&-bang, the delivery of large culverts made of concrete, the dump trucks with their loads of gravel, the engineered changing of swale and drainage.

We were guilty of such disruption ourselves 20 years ago, when we installed the house we love on the land we think of as our own. I try not to mourn the loss of the field next door; it was never ours to begin with, and in so many ways, neither is the property on which our house sits.

The land belongs to no one. It is earth’s. If it belongs to anything it is to the generations of dragonflies, lightning bugs, red-tail hawks, barred owls, and rotund skunks, all of which preceded our appearance here by centuries.