The past 10 months have been especially notable for public protest here and abroad. As it happens, I’ve been trying to write a poem about my father’s participation in the voting-rights march (1965, Selma to Montgomery AL), a kind of occasional poem to commemorate the 50-year anniversary. Then the movie “Selma” was released, which I just saw at the cinema.

The film, like all “based on a true story” dramatizations, may have focused on perspectives of the protest that worked best for the scriptwriter, may have some historical inaccuracies, may raise some controversy. But as a child whose parents were, though marginally, connected with civil rights through the churches’ participation, the movie felt true in the big way: “capital T” True. Funny, the aspects of the film that engaged me: how I could immediately identify who the actors were portraying (Abernathy, Young, Lewis); the way so many important discussions took place in church basements and classrooms (as the child of a minister, I am intimately familiar with church basements and classrooms); the televising of Bloody Sunday.

And another True thing:  the familiar, biblical-style, preacher-cadence and allusions in King’s speech. People do not talk that way anymore. But they once did, and I recall it well. Rhythm and intonation and the use of allusions and analogies impress the sort of listeners who eventually become poets, I am sure of it.

Right now, I am struggling with my poem. I am not sure I will ever complete a draft that I feel pleased with–maybe it will end  up in my “dead poems” file. What I will do instead is to devote my next post to my father’s depiction of the Selma-to-Montgomery march, from his point of view, looking back 50 years. 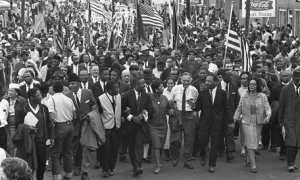