Yesterday, I attended a reading by former US Poet Laureate Kay Ryan in a more intimate setting (a luncheon) than I’ve ever been privileged to hear her at in the past. An audience member asked her how she would define art. Alas that I don’t write quickly enough to have taken her words down verbatim, but she offered a lovely answer.

She said that if a person cannot really be happy without doing it, and cannot keep from needing to do it, and if it nourishes or gives back to that person in ways nothing else can–then that “it” is art, in her opinion.

I suppose art also ought to speak to others, but I am not sure that is as necessary as art critics think it is.

Speaking of critics, and of art, I was impressed with Hilary Mantel’s 1998 novel The Giant, O’Brien for reasons that made a few critics rather lukewarm about it. The author is best known for her amazing historical works, well-researched and full of believably human perspective. O’Brien is a departure in several respects although still historical fiction. I read this book as an ambiguous moral tale, a myth, a story about stories (and art) and a depiction of ways the Enlightenment created significant losses in the midst of its gains. So I was less bothered by the exaggeration of certain personalities or minor plot gaps. O’Brien, a storyteller of the most shamanistic/primitive sort, also possesses a modern (Enlightenment) intellect and an artist’s “intuition.” But he never achieves fame, or the goal of restoring a beloved pub–the place he learned his craft–and dies painfully and slowly, impoverished and nearly abandoned.

As O’Brien nears death, Mantel writes that there comes “a point in fatigue or pain when logic slowly crumbles from the world, where reason’s bricks sieve to crumb. Where content flits from language…and departs.” And her character, the giant–who embodies in his hugeness the epitome of mythical narrative, the kind that sustains us even in dire poverty–eventually comes to the conclusion that the poor among us lose all. Of the poor man, he muses:

Stories cannot save him. When human memory runs out, there is the memory of animals; behind that, the memory of the plants, and behind that the memory of rocks. But the wind and the sea wear the rocks away; and the cell-line runs to its limit, where meaning falls away from it, and it loses knowledge of its own nature. Unless we plead on our knees with history, we are done for, we are lost. We must step sideways, into that country where space plaits and knots, where time folds and twists: where the years pass in a day.

What within us plaits and knots and folds and twists but the brain itself? We pass along our knowledge and, more importantly, our stories. That is done from brain to brain through language and music and art, even as the individual brain comes to the end of its viability and vitality. We step sideways into another person’s brain, just as O’Brien’s listeners memorize his tales, his cadence, his figurative speech. So, in the end, O’Brien is wrong.

I attended a funeral today at which the officiant encouraged us to keep the departed alive in our hearts and for the future by telling stories he had told or by relating stories about him to anyone who might listen. I know I have previously written about this idea in conjunction with readings and philosophers and art and literature. The more I encounter it, the truer it seems to me.

The bereaved spouse at this funeral is a person who is losing her own story through senile dementia, though she has some occasional awareness of her memory loss. Her ability to carry on her husband’s narrative is already deeply diminished or perhaps completely gone.

These are among our risks.

These words brought to mind my long-time friends, the craft-artists David Ellsworth (turned and other wooden forms) and Wendy Ellsworth (beaded forms). This month, for the first time in their many years together, they have a joint exhibit in the gallery space at Jenkins Arboretum (Devon, PA). The photos below are snapshots Wendy took, and their individual work is best viewed in person or on their studio website. [Contact the artists for permissions, photos, information about workshops and talks.] 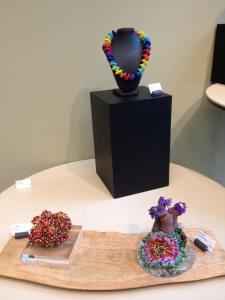 Wendy Ellsworth’s seaforms, and a necklace 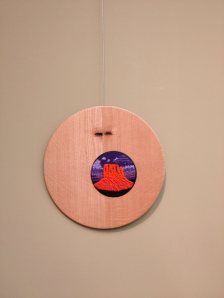 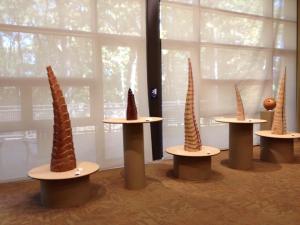 I have known Wendy and David for over 25 years, and I can testify that the work each of them does fits Kay Ryan’s description of art. They are artists, and their work nourishes both of them–and nourishes us, the beneficiaries, as well.

For today, these are my stories.