In a post late last year, I examined a Gerard Manley Hopkins poem for the way the lines and images might be considered as hinges. Another metaphor for how poems work–one I have been churning in my mind for a couple of years now–is joinery of another kind: mortise and tenon. What joinery does in woodworking is allow the cabinetmaker to connect separate pieces of wood together in such a way as to allow a little movement as the wood responds to temperature and moisture changes. Good wood joinery requires experience and thoughtful attention, as there are often additional challenges such as connecting end grain to long grain. Amateurs resort to screws, nails, and glue to cobble projects together because joinery takes time to learn and requires technique and practice that the average DIY “carpenter” does not possess.

True craftspeople learn, practice, and employ conventional joinery techniques and often develop their own signature styles. The craft of woodworking parallels the craft of poetry: there are tools and techniques, strategies and conventions, patterns to follow, and inventions and innovations to create. Both crafts join together materials that seem alike (wood to wood, words to words), and yet it can be damned hard to get those connections to hang together solidly and make a coherent and stable whole. 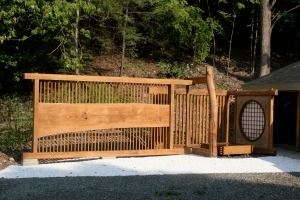 My friend Toshio Odate was trained as a shoji maker and has worked as an educator, artist (sculpture), and craftsman-in-wood for most of his 82 years. Possibly his best-known book is the practical but also spiritual Japanese Woodworking Tools: Their Tradition, Spirit and Use. This text will teach you how to choose, care for, sharpen and use traditional Japanese hand tools, meanwhile illuminating the history and spirit of the woodworking craft in Japan. Toshio reveres the work of humans, the human touch, the effort of making that goes into a handmade object; and his sculptural pieces reflect his passion. The large sculpture above, Pride of New England, stands on his property under the hardwood trees and above the nearby creek. Nothing holds these huge slabs and trunks of wood together but hand-cut joints: mortise and tenon, mostly.

I’m going to try to explain a connection between poetry and joinery through a brief examination of the poem “Whereof the Gift Is Small” by Maxine Kumin. This poem appears here, and I think you ought to check out the link to a Q & A on this poem, as it is enlightening and amusing (as Kumin so often is).

Whereof the Gift Is Small

And short the season, first rubythroat
in the fading lilacs, alyssum in bloom,
a honeybee bumbling in the bleeding heart
on my gelding’s grave while beetles swarm
him underground. Wet feet, wet cuffs,
little flecks of buttercup on my sneaker toes,
bluets, violets crowding out the tufts
of rich new grass the horses nose
and nibble like sleepwalkers held fast—
brittle beauty—might this be the last?

This lovely small poem is framed by phrases from Henry Howard, Earl of Surrey’s sonnet “The Frailty and Hurtfulness of Beauty,” so right away we have an old poem joined to a new one; and as Kumin admits in her commentary on the piece, “Picking lines from others’ poems is hazardous and I don’t recommend it.” Woodworkers will recommend that old, seasoned wood not be joined to green wood for practical reasons. Good reasons, too. But that does not mean one should never attempt it or that it cannot be successfully done. A master like Maxine Kumin can succeed–but with caution.

How might one approach the joinery of words as apparently distant from one another in tone or image as “sneaker” and “rubythroat”? The grave of the gelding (a gap, into which something solid may be placed) gives the reader one opening. There is also the stepping-down aspect of the images, each connecting to the next. The bird appears higher in the poem, quite literally, up there with the lilacs fading on their tall stems; but the alyssum blooms much lower to the earth, as do the bleeding hearts where the bee is busy. The grave and beetles take us deeper. Then, up ever so slightly, to the low-growing buttercups and the damp cuffs of the speaker’s trousers and the noses of still-living, grazing horses…with a “brittle” reminder that this season is short (“the gift is small”). If you are familiar with Surrey’s poem, there’s a marvelous resonance here, though I feel Kumin’s tenor is a bit less cynical than Surrey’s. 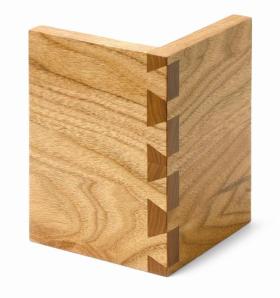 Kumin’s poem is not a full sonnet, and some of her end-rhymes are slant. A modernity pervades her piece, yet the older poem’s language and sensibility are evoked nonetheless. How elegantly she achieves this balance. I think the first joint in the poem appears at line 4, at which point the nature imagery of the first three lines, which could incline to the romantic, solidly connects with the real fact of death. This line also introduces us to our speaker: the gelding is “my” gelding. Line 6 provides another clear connection: the speaker here exists very much in the present moment, wearing sneakers, noticing the buttercups. This line fits into the poem like a well-cut dovetail, linking the pastoral descriptions with the reflective mode the speaker turns to after observing the horses. And there, between the em dashes, we find Surrey’s “brittle beauty,” a tenon that fits the space and holds the entire brief poem together.

Good joinery is often invisible except to those who appreciate the work and take the time to look for it. Toshio solved the engineering challenge of constructing his sculpture through a process of reflection, experiment, experience, and revision. How like a poet’s work that seems to me! When I told him I feel his work is analogous to poetry, he was initially flabbergasted. Maybe the surprise stemmed from a difference in the approach to poetry across cultures, or maybe from a difference in the way a plastic artist perceives a largely abstract art like poetry. Maybe I could not explain my idea adequately to a person for whom English is not a first language. Actually, I’m not certain he believed there is as much human touch and hand-work involved in poem-making as there is in woodworking or the sort of made-by-hand sculpture Toshio does. We agreed not to fully understand one another.

About a year later, I attended a special event at his home, a celebration of the Object as Being, for which I composed a poem. That summer, he called and said, “I think maybe I understand now what you mean.”

endnote: If you’re interested in learning more about Toshio Odate, here is a 1996 article from The New York Times and a 2009 blog post (including a short video) from Tom’s Workbench, as well as a short on making shoji screens–from Martha Stewart’s network.