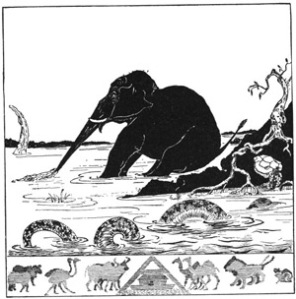 OKAY, cynics, I know this may be a bit of a gloss; but here is another older post which is the keynote speech I gave for DeSales’ Sigma Tau Delta induction (Honors society of English majors), April 2010.

Why the English Major Is So Adaptable: A ‘Just-So’ Story

When I was an undergraduate, Oh Best Beloved, I was not at all certain of my life path. I attended an alternative, seminar-college program that—gasp—did not require me to proclaim an academic major. In my first two years of college, I wandered through classes in studio art, Renaissance history, feminist literature, social anthropology, psych, physics, dance, and philosophy. Then, I began reading in earnest. Previously, reading had been merely an obsessively entertaining hobby; as a junior, I wanted to learn the “how” of writing. I graduated with enough credits in both English and Philosophy to have been a double-major, if my institution had required majors, or to have received an undergraduate creative writing degree, if such a thing had existed in days of yore.

And then, I was out in the world. The world was in a terrible recession. Jobs were scarce. Inflation was in the double digits. Gas prices were skyrocketing. The sky was falling, and I was a newly-minted English major.

All my Wise Elders advised me to specialize. That meant going to graduate school, which I probably should have done a little sooner, or learning a trade. I thought I could survive outside of academia despite the economic woes, the scarce want-ads. My reasoning was that I had four years of humanities training in critical thinking, research, and problem-solving and that at 21 years old it was time to put those theories into application. I thought I had learned to be adaptable.

And what do you think, O My Children?

You are likewise English majors, and you are also facing a time of recession and a paucity of careers in your chosen area of interest. This will not hinder your success, though it may make your career journey a little more…circuitous. Or shall we say: intriguing. But you like a challenge, don’t you? That’s the most terrific thing about choosing creative writing, or English, or rhetoric, or literature—the more you study them, the more intricate and complex and revealing these subjects are. I have never met an English major who wasn’t also a dedicated life-long learner. But I have met English majors who are lawyers, and psychologists, and social workers, and business executives, and filmmakers, and visual artists, and physicians, and ecologists, and diplomats, even computer geeks, not to mention those other careers: screenwriters, playwrights, poets, novelists, journalists, bloggers, teachers…

So, Best Beloved, do not sell yourself short. Furthermore, do not expect a “Reader, I married him” moment with your career. Allow yourself room to transform. Carpe diem.

What that meant for me back in 1979 was a temp job for the legal discovery department of a large law firm. From there, I signed on as a member of the International Union of Typographers No. 6 and learned a specialty: typographical proofreading. That field went extinct with the advent of desktop publishing. But by then, I’d jumped to advertising, which I hated, and into magazine work, which wasn’t so bad. There’s a Darwinian term for this: co-adaptation. I was finally getting close to a more specialist use of my English major background as the economy improved; and I married and had children and, in time, went to graduate school for the scholarly pursuits I’d missed so much.

I didn’t starve. Neither will you. You can do research. You can make yourself clear. You know your audiences may require different modes or styles of you, and you’ve learned how to adapt yourself and your arguments to those audiences. You can be persuasive. That’s how I got my first job after the temp work wound down; I was inexperienced but convincing. Even in a tight job market, employers are seeking people like you—adaptable, well-educated people. My husband recently directed me to an article in the New York Times that stated today’s businesspeople want employees who are clear communicators, especially in writing. This is partly because executives do their own writing nowadays. Fewer secretaries to rely on; each person’s expected to make herself clear—on her own written merits. Even if it’s email instead of the paper memos of my day.

The jobs I’ve briefly mentioned paid my bills and got me medical insurance but did not satisfy my urge to practice the how and why of writing, so I did what writers generally do: I wrote. I cannot emphasize enough the role that constant practice of craft plays in the development of a writer. It doesn’t matter if no one sees your work—though I encourage you to share it with others and get feedback and critique—what matters is that you continually practice what you’ve learned in college and extend your education through application and extension of those principles.

If you find yourself in a day job that has little, apparently, to do with your major, don’t despair. Because writing is portable. I still write most of my drafts with pen or pencil in a small notebook, and laptops are pretty easy to transport—you can, with a little self-discipline, write anywhere. In my day, I have written in small dingy office warrens, in the waiting rooms of doctors and music teachers, in the parking lot while the high school band wrapped up its practice, in the sun beside the dressage ring at the horse farm, while my babies were napping, while the laundry was cycling, in the wee hours of the morning before anyone else wakens. The poems and essays I drafted under these circumstances sometimes reflected the places of their composition—but not always. I have waxed metaphysical in playgrounds. Another example of becoming adaptable out of necessity, Best Beloved, when the Great Magician or the Djinn of All Deserts or the small god Nqa tried me with obstacles to test my persistence.

Make the time to write, because writers can get rusty. Above all, make the time to read, because after you graduate, reading is the best way to continue your literary education.

But you knew that.

Of course, there is graduate school. And there are writing seminars and getaways and retreats and conferences. If you haven’t got the time or money to get to writers’ conferences or workshops, you can adapt by exchanging literary emails with a few like-minded friends or gathering in a library or coffee shop to exchange work or discuss books that excite you. Scholarship may seem like a solitary pursuit, but it benefits from lively interactions with other human beings.

Yes, Oh Best Beloved, do remember other human beings. We do not, after all, write only for ourselves; we write in and of and for a community of people. If our work is obscure, obtuse, or unclear, we are not taking part in this communication. The most fundamental purpose of language is to make clear our intent to another person who is, after all, not inside our brain but functioning under his or her own neurological system. Language—in our case, English—is the most formidable tool for demanding, commanding, sharing, expressing. Those in this room are understandably passionate about it. I am pleased to be among you. The world badly needs your talents, enthusiasm, and the abilities you possess to analyze the facts and transform yourselves and others because, My Children, the English Major somehow became adaptable, and that is all to the good.